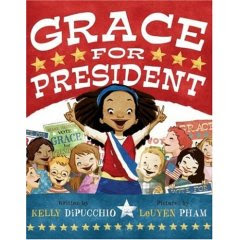 We love this book!
TS says" I like this book because they got to count votes and I like numbers. The colors are good, lots of yellow. What I disliked is more people voted for the girl and not the boy. I like it when boys win. I imagined that Senator Clinton was Grace and Senator Obama was Thomas. That's why I wanted Thomas to win because I want Senator Obama to win."
Please folks no political commentary he is only five.

Barnes and Noble says"When Grace's teacher reveals that the United States has never had a female president, Grace decides to be the first. And she immediately starts off her political career as a candidate the school's mock election. But soon, she realizes that she has entered a tough race. Her popular opponent claims to be the "best man for the job"—and seems to have captured all the male votes—while Grace concentrates on being the best person. In this timely story, author Kelly DiPucchio not only gives readers a fun introduction to the American electoral system, but also teaches them the value of hard work, courage, and independent thought—and offers an inspiring example of how to choose our leaders. "